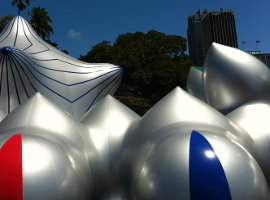 In the UK, every city, town and even village seem have their own festivals these days. There's been an explosion in summer festivals over the last ten years, and the Netherlands is no different. As well as the big names like Pink Pop and Lowlands, there are lots of alternative, arty, cutting edge events to enjoy over the summer. Here are some recommendations for 2013 across Belgium and the Netherlands.

Sounds of the Underground
9-12 May - Amsterdam
Held across various locations in the west of Amsterdam, this is a festival of alternative and independent music and culture with noise, indie rock, psychedelia, avant-garde, bass music, improv jazz and underground dance. There are also documentaries, workshops, art and performances. (Website in English.)

Dag in de Branding (A Day at the Beach)

11 May - The Hague
This festival is a platform for new contemporary music (classical and opera). This 28th edition of Dag in de Branding has a distinctly Russian flavor, and as well as including Russian masterpieces of the 20th-century, there will be brand new compositions from the 'Motherland'. Website in English with videos of the performers for a taste of what you can expect.

Le Guess Who? May Day
18 May - Utrecht
This is the second edition of Le Guess Who? May Day festival, which brings artistic and groundbreaking pop music to multiple locations in Utrecht’s city centre. This year includes Deerhunter, the Haxan Cloak, Dirty Beaches, amongst many others. A great way to see new music and get to know Utrecht. (Website in English.)

Twente Biennale
23 May - 9 June - Enshede
This interesting festival is a collection of controversial exhibitions, lectures, performances, music, and much more. The theme of the festival this year is 'Identifying Europe' and will be exploring the history, the near future, but most of all about Europe today: such as the EU, the crisis, populism, Fortress Europe. It will take place in Roombeek in Enshede - the area that was formerly destroyed in the firework disaster of 2000, when 400 homes were destroyed, and is now being innovatively redeveloped. Check out the website (English) to be inspired to go (I think I'll go for the Architects of Air alone!).

Tacnival
13 July - Eindhoven
Organised by the well-established local Zodiak Commune of acid freaks and techno heads, responsible for the second generation of Acid, Techno and Electro-parties, including the annual Queen's Day Festival in the centre of Eindhoven. Not many details online yet - so follow them on social media to hear the latest (see the website for details).