On Friday 8th March we visited the STRP festival in the Klokgebouw in Eindhoven. It's a collection of exciting works of art on the cutting edge of life and technology, many of which are being shown for the first time in the Netherlands. The theme this year was 'city of cyborgs'.

Although this was the sixth STRP, it was the first in its new form - the Biennial. The festival ran for 10 days, and was a hybrid of 'music, art and technology for curious minds'. That feels like an apt description for the festival which always seems to be full of interesting and surprising exhibitions, as well as bands and performances.

We went specifically to interview D-Fuse and Labmeta from London, and see their audio-visual work Tekton (the interview featured on our radio show). Tekton is described as "a series of audio-visual works exploring the materiality of light in motion produced by electronic assemblages ...  inspired by Moholy-Nagy's Light Space Modulator", which sounds intriguing, but we weren't quite sure what we were going to experience.

The control room for the show was an enclosed space with a large screen at the back and then a gauze at the front several metres away. The mechanics were very high tech, and although most of performance was pre-prepared, there was a live element within it.

Once the show started it was mesmerizing. It was a wonderful show of patterns of lights linked to minimalist  electronic music. The two different surfaces for the projections - the screen and the gauze - displayed different patterns at the same time, creating a 3-D effect. What I particularly liked was how sometimes a section seemed just too long, somehow making the overall effect even more compelling.

I now understand what audiovisual art is, and in this case it was both beautiful and thought-provoking. Very impressive and highly recommended. Here's a clip of Tekton to give you an idea what it's all about:

As well as performances from bands, DJs, performance artists.. and audio-visual artists over the 10 days, STRP also has an expo - an exhibition of concepts that align with the theme of the festival. So we saw lots of robots and automated ideas, and much of it participatory.

We had a great evening ... and left feeling like we wished we had seen more of the STRP festival. We'll be back for the next one in 2015, this time with the full week pass ticket.

Some images from the STRP expo 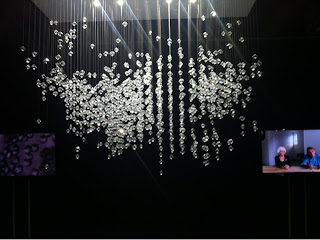 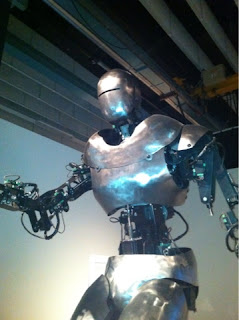 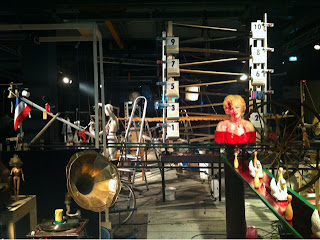