It's not even lunchtime yet, and already the sound of random fireworks being set off by naughty boys around the neighbourhood is dominating the air. In Britain, Bonfire Night - 5th November is the main firework night of the year. But in the Netherlands it's New Year's Eve - when at midnight a spontaneous, massive and wonderful firework display goes off around the country. Thousands of people contributing to a public display that would be the envy of any municipal event. It's fantastic to enjoy from the safety of your own home... but on the streets, near bars, it can be a bit scary and feel like you're navigating a minefield. It's not for the feint-hearted. The firework-fest lasts over an hour and then a heavy fug of smoke fills the streets. 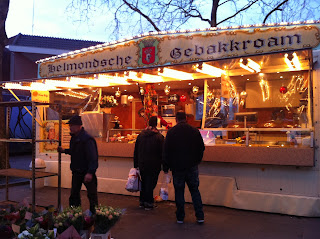 New Year's Eve, or 'Oud en Nieuw' (old and new) or 'Oudejaarsavond' (old year's evening) is often celebrated at home with families or friends, and the midnight hour is celebrated with champagne and 'oliebollen'. Directly translated, this means oil balls, which is a sobering reminder of how they are cooked - in the deep fat fryer. They are little doughnuts, mainly plain with no filling, and are doused in icing sugar ('poedersuiker'). Even better is  a version called 'gevuld oliebollen' which contain dried fruit.

Oliebollen are sold all over the country from brightly lit stalls that start to appear near markets and train stations from the end of autumn, marking the changing of the season. As well as the standard oliebollen, you can also indulge in ones with fillings such as apple, cherry, banana or custard - these are called 'berlinerbollen', and are more like a British doughnut. Another variation eaten on New Years' Eve is the 'appelbeignet' - slices of apple coated in a similar yeast-based dough and deep-fried.

All that fat is great for soaking up the alcohol. Fijne jaarwissleing!